There are two WiFi networks in permanent operation at TUKE with the following advertised SSID identifiers:

Eduroam is an international project and at the same time a service through which users from participating organizations mutually gain access to the Internet in the host organization involved in the project using their home access data for authentication. The administrative overhead of accessing the network is thereby significantly reduced and at the same time user mobility is supported.

SANET provides its members with the basic infrastructure for using the eduroam service. In Slovakia, the project is implemented in the following organizations:

Application for locating the availability of the eduroam network

Connecting to the eduroam wireless network for TUKE users

To use the service, a WiFi card (module) (802.11a/b/g or 802.11n) is required in your device and you must be within range of a WiFi connection. The service must be configured in the operating system. The connection has been tested for OS:

You can find the connection instructions on the page → Eduroam wireless network user guide.

Information about logging into the eduroam wireless network at TUKE

TUKE users log in to the eduroam network with their unique login which is in the format xy123ab@tuke.sk (with the added @tuke.sk suffix) and the WiFi password they previously set on the page https://identity.tuke.sk/ in the "View and Edit Profile" tab.
Users from other organizations participating in the eduroam, pri prihlasovaní sa do eduroam project enter the suffix of their organization when logging into eduroam, that is, they log in with, e.g., login_eduroam_upjs@upjs.sk and the WiFi password generated in their home organization.

Configuration of WiFi clients for the eduroam wireless network

To simplify the configuration of WiFi clients in the OS environment of Windows 8.1/10, Linux, Mac, iPhone, an application was created for automatic setting of network authentication parameters which you can download here. Profile settings can also be done manually according to the steps on the Eduroam wireless network user guide.
Subsequently, when logging into the eduroam network, the user enters their login data in the form xy123ab@tuke.sk where xy123abis their unique login and WiFi password.

When connecting to the TUNET-guest network, the user is alerted to the fact that they are connecting to an unsecured network which only allows the following protocols:

and it is recommended to use the eduroam network. The text of this notification is displayed to the user as information when logging into the TUNET-guest WiFi network: 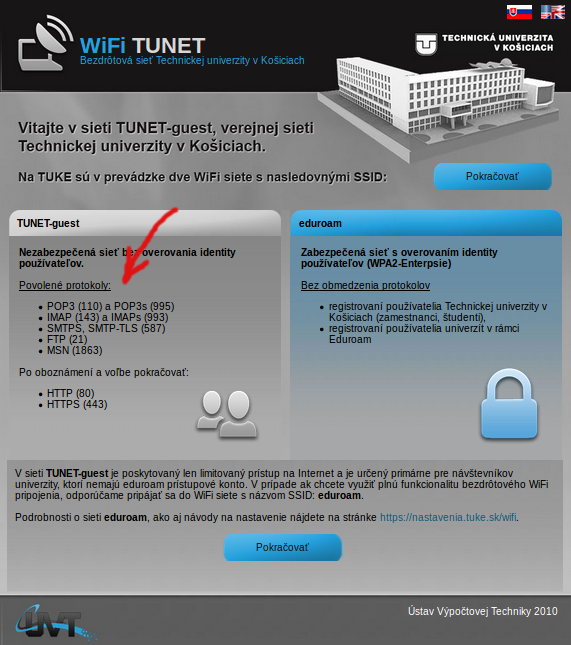 Where you can connect:

The WiFi infrastructure in operation at TUKE works with 802.11a/b/g/n/ac standards. A centralized solution from Cisco is used and a total of almost 300 access points managed by two redundant WiFi controllers are deployed at TUKE. WiFi access points are installed in the following locations:

The TUKE campus map shows the number of access points in individual buildings in mid-2019. 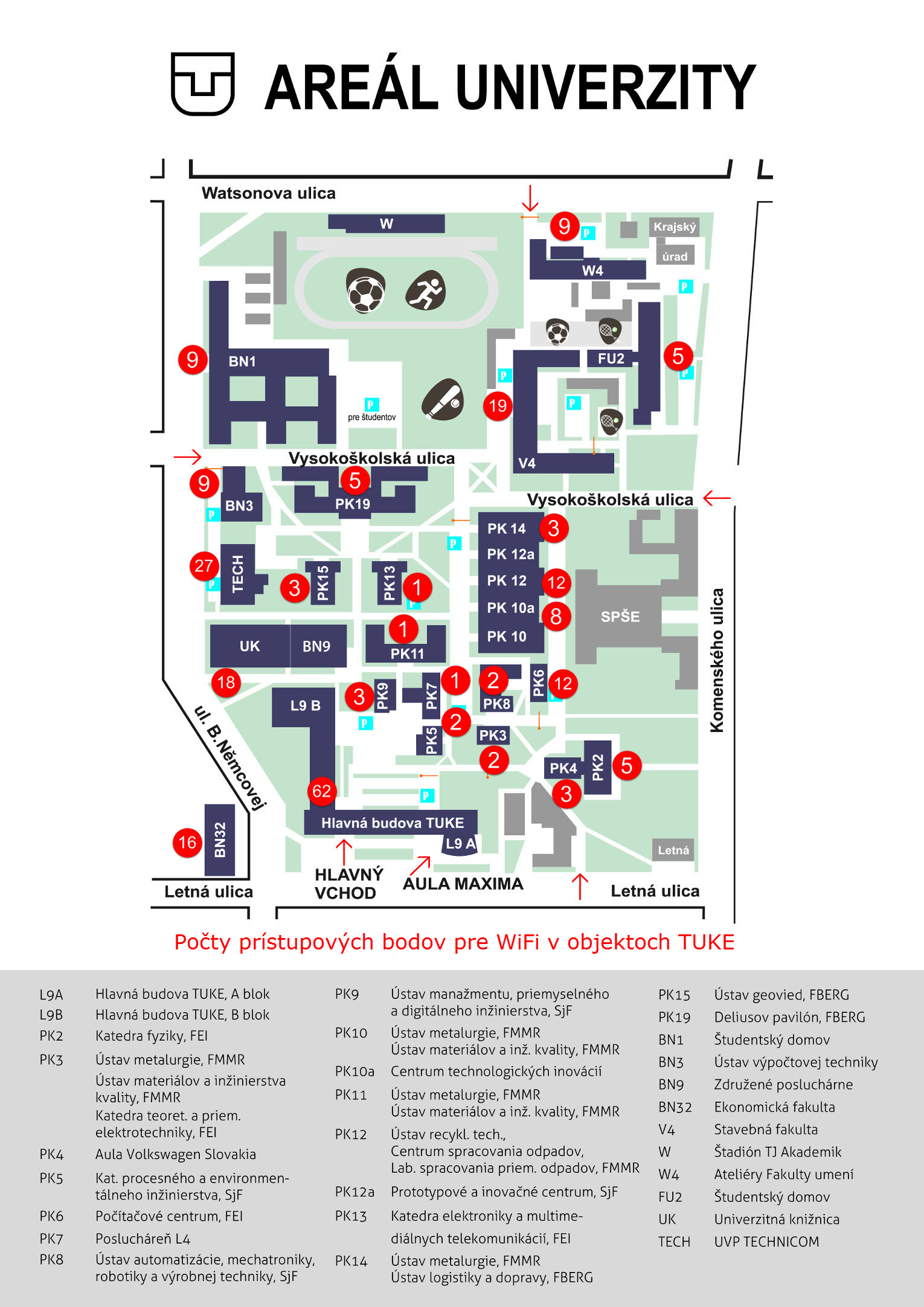 Access points are located in the interior of buildings, usually near the ceilings or on the ceilings of corridors. For the user we present an illustrative image of one of the models used to enable them to visually locate the access point. The Operating Regulations PvP/TUKE/PSIS/09 of the TUNET Computer Network and the TUKE Information System as well as the SANET Acceptable Use Policy also apply to the use of WiFi networks at TUKE.